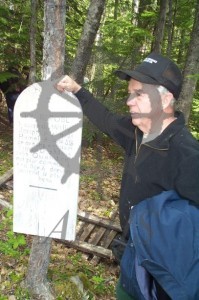 :
Milt Parent posing at grave of Willy Joseph Alphonse Hamell (age six), Comaplix cemetery, 2005. The grave markers were restored by Milt Parent of the Arrow Lakes Historical Society. Notes from Greg Nesteroff: 'The cemetery is up a steep hill, past what used to be a schoolhouse, and at one point had a white fence around it. The earliest burials appear to have been a pair of siblings who died of malignant scarlet fever in 1903: Adélia Annee Lilly and Willy Joseph Alphonse Hamell were ages nine and six. The children’s twin wooden gravemarkers bore the poignant French epitaph “Quand on est pur comme a son age le dernier jour est le plus beau.” Translated, “When one’s life is pure, the last day is the most beautiful.” Unfortunately, young people were all too often taken before their time in Comaplix. At least nine people under the age of 30 died there, including two infants.'