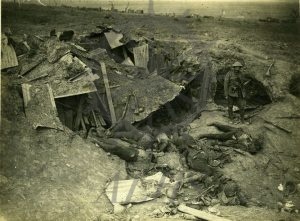 :
British solidier walks amidst bodies of German soldiers at gun position destroyed by British forces during the Battle of the Somme, World War I, Contalmaison, Somme, France, 1916. Inscription on rear: 'I had the job of consolidating this position & have several [illegible] of it. Photo by British Official Photographs.