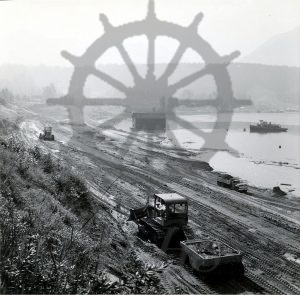 :
Nakusp waterfront (Bay Street) being graded in advance of construction of new concrete erosion barrier to protect hillside above Upper Arrow Lake at Nakusp from rising waters to be created by construction of Hugh Keenleyside Dam, May 1967. Canadian Pacific Railway workshop at back centre. Tug Arrow I at right. Photograph received 14 July 1967 by BC Hydro Land Office, Nakusp. Inscription on envelope: 'Mr Archie McPhail c/o Knight Gravel: Here are a few pictures of the waterfront work. Please see that your men get a few of them as I promised. I hope to find some more for you people. –Neil McKelvie, BC Hydro'.