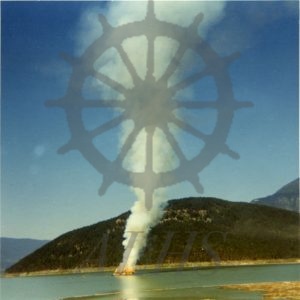 :
Large smoke plume emanates from top of SS Minto in the centre of Upper Arrow Lake, Galena Bay, 1 August 1968. The derelict sternwheeler was towed to the centre of the lake and burned during a Viking funeral ceremony. Photo by BC Hydro. Photo was deaccessioned from Nakusp & District Museum (accession no. 2001.013.006k).