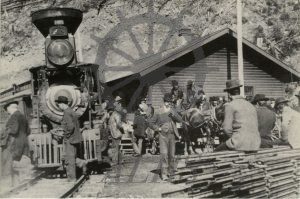 :
Postcard showing group gathered at Kaslo & Slocan Railway station, Sandon, ca. turn of 20th century. Pioneer Postcards postcard no. 219. Inscription on rear: 'The Kaslo and Sandon Railway was only 31.8 miles long, but in the last decade of the nineteenth century it was very important, being actually the key to the lead situation in Canada. Built to transport ore containing lead, zink[sic] and silver from the mines in the Sandon district to kaslo on the way to the smelters, it formed a part of one of the many thrusts of the Great Northern Railway'. Printed by Wayside Press Ltd., Vernon/Kelowna