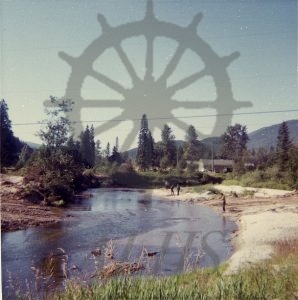 :
Workers awaiting arrival of flatbed truck carrying Hank Hopp & Corrie Hopp house as it prepares to cross shallow spot in Inonoaklin Creek near Edgewood, 10 June 1967. The house was moved to the Hopp family farm in the Inonoaklin Valley north of Edgewood in advance of the Edgewood townsite's flooding by the construction of Arrow Dam the following year. Bert Hopp and Doris Hopp moved into the house in autumn 1968.