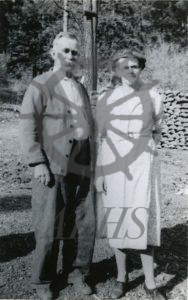 :
Harry Old and Emily Old of the Inonoaklin Valley north of Edgewood posing outdoors, June 1943. Accompanying newspaper clip: '50 YEARS IN INONOAKLIN VALLEY: This year A. H. Old celebrated the fiftieth anniversary of his arrival in the Inonoaklin Valley, Edgewood area in 1893. It was then known as Fire Valley. He left Cornwall, England, in 1890, going first to Salt Spring Island at the Coast, and then to Butte, Mont., where he workd as a miner. From Butte he went to Olds, Alberta, then back to B.C., and was one of the first men in Inonoaklin Valley. He pre-empted land, and did considerable prospecting in his earlier years, and as time went on built up a nice farm and comfortable home for himself and Mrs. Old.'