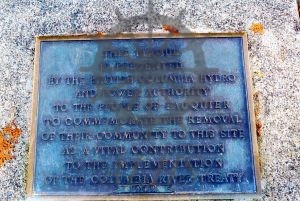 :
Commemorative plaque laid in 1969 by BC Hydro at foot of 'Needles' monument, 117 Oak Street, Fauquier. Photo taken February 2015, one month before demolition of the monument. Inscription: 'This plaque is presented by the British Columbia Hydro and Power Authority to the people of Fauquier to commemorate the removal of their community to this site as a vital contribution to the implementation of the Columbia River Treaty - 1969