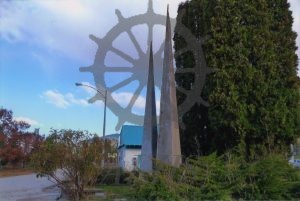 :
Deteriorating 'Needles' monument, 117 Oak Street, Fauquier, February 2015. The Needles were constructed by BC Hydro in 1969 as a monument to the village to Fauquier to commemorate the relocation of the community in advance of the flooding of the Arrow Lakes valley. The two concrete pillars symbolise the Needles sandbars that formerly existed at the north end of Lower Arrow lake. The pillars had been deteriorating for many years when they were finally demolished in March 2015. J&S Snacks store in background