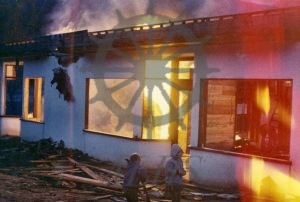 :
Two children watch as Millar's Hardware store is being burned by BC Hydro during clearing of Edgewood townsite in preparation for flooding of the Arrow Lakes created by the High Arrow Dam (Hugh Keenleyside Dam), April 1968.