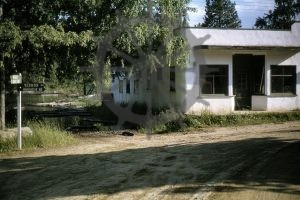 :
Millar's Hardware, Valley Road at Lake Drive, Edgewood, partially surrounded by water during 1967 flood on Lower Arrow Lake, Edgewood. The store would be demolished the following year during the clearing of the Edgewood townsite in advance of BC Hydro's construction of the High Arrow Dam. Note the directional signs at the intersection to the left of the store.