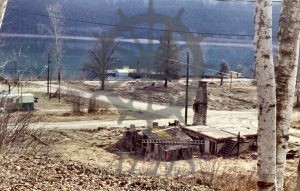 :
Partially-demolished Ford home ('The Cobbles') sits alone surrounded by vacant lots during demolition of original Edgewood townsite in preparation for relocation of the townsite across Inonoaklin Creek prior to BC Hydro's flooding of the Arrow lakes, ca. 1967. Lower Arrow Lake and ferry seen at top. Notes from Bruce Rohn: 'That’s the Castlegar ferry in background. It was on its way up for service at Arrow Park. This is Nov 1967. This is the second Castlegar ferry. There was 2 ferries down there 1960-67 and this one came up after they finished the dam'