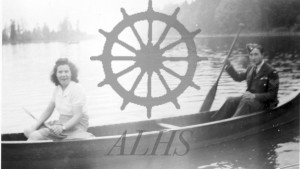 :
Josephine Houdayer (left) and Alfred Seward (right), both of Arrow Park, canoeing in Stanley Park, Vancouver, May 1942. Notes from Richard Dowson: 'I know that Josephine was a friend of Alfred Seward and she moved to Vancouver. She worked there during the war at the Boeing aircraft assembly plant at Sea Island assembling Canso (PBY-5) flying boats. Alfred Seward flew the Canso off the East coast during the war and found it amusing that Josephine would build the aircraft he was flying - and they were both from little old West Arrow Park, B.C. Also attached a photo of Alfred and Josephine canoeing at Stanley Park in May, 1942. He had been Posted to Patricia Bay for training on flying boats and was en-route to Victoria.'