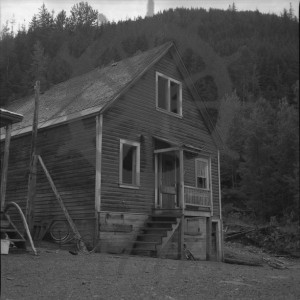 :
Former Kaslo & Slocan Railway liquor warehouse, Sandon, 1972. Notes from Hal Wright: 'Built after 1895. Sold by the K&S in 1910 to James Greer, merchant in Sandon. He renovated the building to become his family home. After moving to New Denver, Greer sold the home to the Silver Ridge Mining Company in the 1940s. They used it as a bunkhouse and office.'