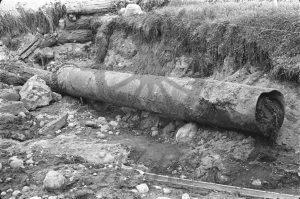 :
Clogged pipe found during excavation of land for Hut Holdings building, 92 Broadway Street W, Nakusp, August 1975. Caption from Arrow Lakes News, 6 August 1975: 'A plugged culvert recently pulled out of Broadway between Nelson Ave. and 1st Ave. caused problems for the village and shows the need for proper drain sewers along Broadway which would have been included in the Broadway improvement referendum which was defeated. The culvert drains the vicinity from Broadway to 5th St. North.'