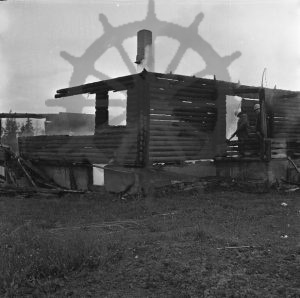 :
House of Syl Cann & Liz Cann on fire, Crescent Bay. Caption from Arrow Lakes News, 1 June 1972: 'Firemen in Nakusp were called to the home of Syl Cann in Crescent Bay on Tuesday morning at 5:40 to find his home in flames. As there was no water service to the area, firemen ran out of water before they could control the blaze. A larger tanker owned by Nigel Waterfield was brought into use but too late as the home was already levelled by the blaze. The fire is believed to have started in the attic by some electrical failure. The entire Cann family reached safety but everything was lost. Friends have rushed to their aid and already they have been offered a home to stay in for the time being.'