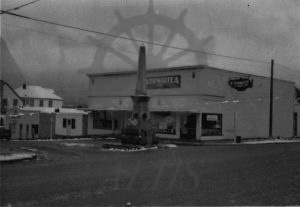 :
Overwaitea Ltd., Slocan Avenue South at Broadway Street (Abriel block) with cenotaph in street, Nakusp, late 1960s. Caption from Arrow Lakes News: 'Last week we showed a picture of the Nakusp cenotaph at the corner of Broadway and 4th. Ave. south. This picture is a little more recent showing the Vestrup Hardware store as Overwaitea, now the Canadian Imperial Bank of Commerce. The little store in between Overwaitea and Al's Jewellery was originally moved there as the Christmas toy department of Nakusp Hardware and later became the Arrow Lakes Hospital Auxiliary Thrift Shop. This picture must have been taken shortly after November 11 as the wreaths are still on display at the cenotaph.'