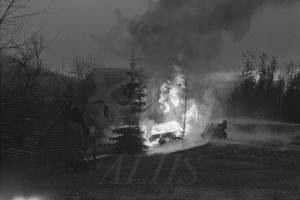 :
Fire at Hugh Nixon home, Glenbank, 12 April 1981. Fire caused by leak in propane tank which ignited and sprayed flames across house, truck, and tractor. Truck was destroyed and rear of house was lost but main house and tractor were saved.