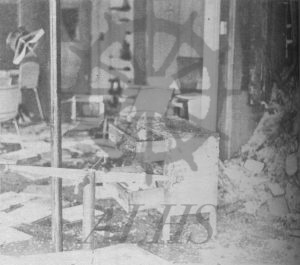 :
Ruined interior of Rice Bowl Cafe, 220 Broadway Street West, Nakusp, 29 September 1981, following catastrophic fire. Caption from Arrow Lakes News, 30 September 1981: 'The inside of the Rice Bowl Cafe and other Nakusp businesses were completely gutted by the fire which left the Modesto Depretto building in shambles. Nothing of the contents of the building was saved.'