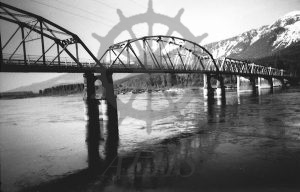 :
Big Eddy Bridge across Columbia River at Revelstoke as seen from east bank of river, ca. 1960s-mid-1970s. This originally carried the Trans Canada Highway across the Columbia until the construction of the Revelstoke Bridge to the north in 1961, after which the original alignment became Big Eddy Road.