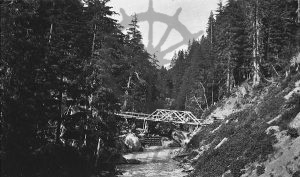 :
View of bridge over Lardeau Creek between Ferguson and Five Mile, 2 miles east of Ferguson, ca. early 20th century. Ferguson is toward the left, Five Mile is toward the right.