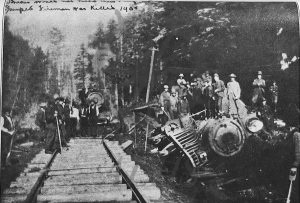 :
Bystanders gathered around wrecked Canadian Pacific (Nakusp & Slocan) Railway train, Sandon, 1905, which crashed while backing down from Sandon to Three Forks. A fireman was killed during the wreck, while Fred Wensley of Brouse broke his arm having to jump from the train.