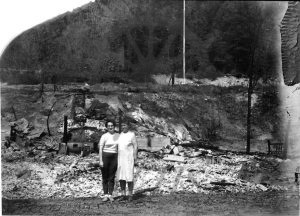 :
Rose Dedosenco (left) and Ida Crawford (right) standing in front of burned-out ruins of Temrick's Red & White Store (Union Hotel), Arrowhead, after it was burned by BC Hydro in advance of the flooding of the Arrow Lakes, 9 September 1968. The Crawford family had owned the store between 1932 and 1959.