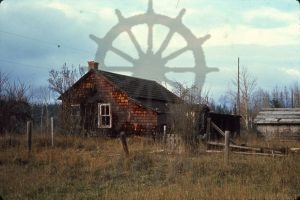 :
The former home of George Sarginson & Lillian Sarginson (occupied between 1948 and 1950), East Arrow Park, 1965. The house was burned later in the decade in advance of the flooding of the Arrow Lakes by BC Hydro.