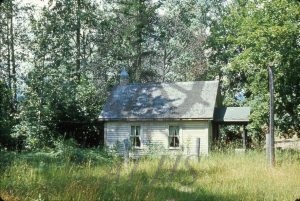 :
Maple Women's Institute room, East Arrow Park, 1965. The building was moved to higher ground later in the decade in advance of BC Hydro's flooding of the Arrow Lakes and became property of Agnes Finch.