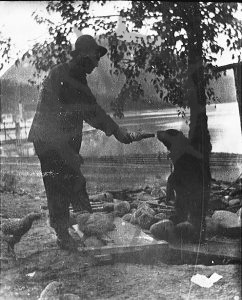 :
Man feeding bear from beer bottle next to tree on Nakusp waterfront above Canadian Pacific Railway tracks, ca. late 1910s-early 1920s. SS Bonnington in background at left. Notes from Milton Parent: 'Sam Kee's bear was willing to share just about anything with the loggers that stayed at the bunkhouse. Like most bears he never turned down a chance to get some beer.'