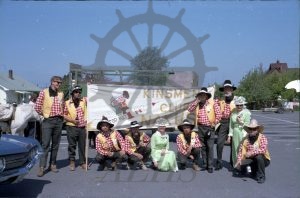 :
Nakusp Kinsmen Club and Kinette Club in costume posing in front of their banner and horse wagon, Kinsmen convention in Victoria, 1971. Photo found on page 126 of Kinette Club of Nakusp scrapbook Kinship. Caption: ‘Would you believe that those Kin and Kinettes went in the parade in Victoria in 1971 with horses?’