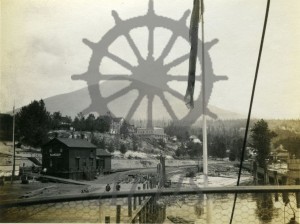 :
Nakusp waterfront as seen from bow of unidentified sternwheeler, Upper Arrow Lake, 1911. Canadian Pacific Railway station and wharf at bottom left. Leland Hotel and Grand Hotel at centre. Notes from Bruce Rohn: 'This is putting the final planking on the new Nakusp wharf, which will be one of the largest in the interior at close to 1200', 200' larger than the old one. This will allow greater dockage for increasing CPR fleet. On old wharf the rail tracks went down the centre of the wharf. Tracks now go down beside wharf making it easier to unload from the boxcars.'