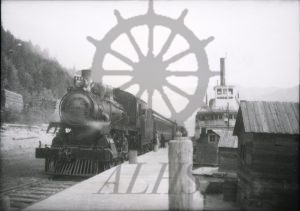 :
Canadian Pacific Railway (Arrowhead & Revelstoke Railway) train, Arrowhead train station, 1953. S.S. Minto docked at right. Notes: 'Canadian Pacific Railway Steamship wharf at Arrowhead, British Columbia, showing train discharging passengers for S.S. "Minto" for the 125 miles trip to the south end of the lakes. The piles of poles to the left are the celebrated B.C. telegraph poles of which thousands are made each year and sent by railroad cars to Eastern canada (sic) and the United States. They are all of cedar wood and some are 80 ft. in length and worth a lot of money. This scene is at the foot of Mount Sproat, 8024 high whose rocky precipices tower close by to left. John Nelson. Sent March 18th 1953.'