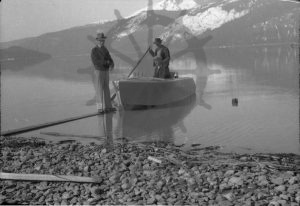 :
Nelson brothers preparing to launch rowboat from shore of Nelson farm on Galena Bay, Upper Arrow Lake, April 1939. Inscription on rear: 'John, Walter, & Henry Nelson about to start out on a trip to Arrow Park. On return we left John on the wharf at Nakusp, as he was going to Nelson, having recovered from injuies sustained at Trail in Oct 1938'.