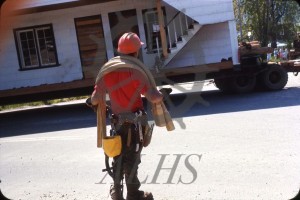 :
A worker from BC Hydro watches as Beau Vista Motel is being moved on flatbed, Nakusp, 27 May 1966. The motel was being moved from Bay Street to 97 Broadway Street West to become the Townhouse Apartments in advance of flooding from the High Arrow Dam, 27 May 1966