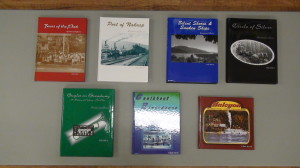 The Arrow Lakes Historical Society just celebrated their 30th anniversary from when they obtained their Society registration on the 4th of December 1984. Their first year, they completely overhauled the museum which was started in 1968 by the Kinettes of the Kinsmen Club. When the Kinettes had to move on to other projects, Harry Murphy and Bert Gardner tried to keep the museum open in the summers. They asked for assistance and a few meetings later, the Society was formed and work was started – cleaning, making new display areas, painting the cement floors, repairing the showcases and to get it ready to reopen in the summer of 1985. To do this work, we contacted Denis Stanley of the Arrow Lakes News to print several small books to cover the costs – the Pioneer Cook Book, Christmas Stories, a poem book, the Arrow Lakes Indians booklet and a reprinting of the PTA cook book that was printed in 1949 as a fund raiser to build the elementary school.

In 1989, through the help of a Federal grant they printed their first book of the Centennial Series called Faces of the Past. We had archive material brought to the Society from Milton Parent’s hobby of taping pioneers and copying their priceless pictures with names and occasions already given. This made the writing of this book much easier because we already had the information needed. This won them their first Award for Historical Writing from the BC Historical Federation. As they sold their books, they saved the funds from book sales to produce six more books. Port of Nakusp, Silent Shores and Sunken Ships, Circle of Silver, and Bugles on Broadway completed the five books of the Series. Milton Parent won the coveted Lieutenant Governors’ award for Historical Writing for the book Circle of Silver in 2001. He then wrote Halcyon: a Captain’s Paradise and Caulkboot Riverdance. We have had to reprint four of these volumes and we do have them all in stock.

When a space for rent became available in the Hydro office, the Historical Society and the Museum decided to separate. There had never been any room in the Museum for the archival material that we were accumulating and which was stored and worked on in the basements of members. We moved into the new office at the Hydro office in 1999. After fifteen years of being at this office, we wondered how long we would be allowed to stay there and also what would happen if the valuable items we had were put into storage. Photos, negatives, and paper items would soon deteriorate. Milton decided to ask the Village of Nakusp if we could build an addition onto the Centennial Building that already housed the Museum and Library. The Village agreed to the construction and after several years we managed to build a spacious office for all of our material.

On the 5th of April we opened our new office to the public and we were thrilled to be able to have more room to do our work and to hold meetings in.  Through another grant (Columbia Kootenay Cultural Alliance), we managed to obtain funding to buy the desks, tables, chairs, an 80” TV set with complete sound system so that we could show our slide shows to the public. We hope to show these to school students in Nakusp as well.

With the sudden passing of author/historian Milton Parent in 2012, we had to find someone with expertise to digitize the over 10,000 photos that Milton had accumulated while taping interviews from 1972 on. Most of these early pioneers are gone but the photos are named and therefore very valuable. Kyle Kusch has been working with us and is very able to do the work on the photos. So far over 15,000 photos have been digitized, named and are available for the slide shows that we have been putting on. Even though these photos have been used in the books that we published and used in newspaper articles, the photos were not given to the society until last year as part of Milton’s estate.

A book on the SS Minto is being prepared now and we hope that it will be ready to publish next year.  We will be doing more family tree work as well; especially of the pioneer families. We managed to complete taking photos of the houses on the avenues and finding the information of when they were built and by whom, and hope to do the same on the streets of the town this coming year.